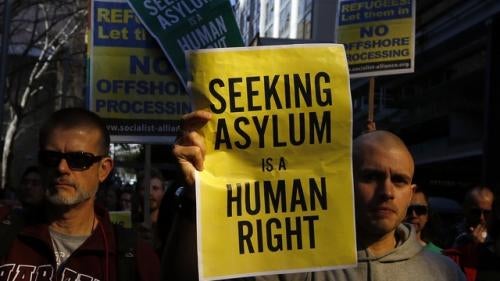 Australia has a strong record protecting civil and political rights, but has damaged its record and its potential to be a regional human rights leader by persistently undercutting refugee protections. In 2013, successive Australian governments continued to engage in scare-mongering politics at the expense of the rights of asylum seekers and refugees. The Labor government reintroduced offshore processing, and the Liberal Party-led coalition government elected in September continued and expanded these punitive resettlement policies, repeatedly trumpeting their refusal to consider resettling in Australia even a single additional asylum-seeker arriving by sea.

Australia also has been increasingly unwilling to publicly raise human rights abuses in countries with which it has strong trade or security ties, fearing that doing so would harm its relations with Asian governments. Such reluctance to speak out validates the stance of those who mistakenly view raising human rights as an act of diplomatic aggression rather than a normal part of principled diplomacy, making it all the more difficult to use foreign relations as a means of improving human rights protections globally.

Successive governments have prioritized domestic politics over Australia’s international legal obligations to protect the rights of asylum seekers and refugees, many of who have escaped from appalling situations in places like Afghanistan and Sri Lanka. Too often, the government has attempted to demonize those trying to reach Australia by boat and has insisted that officials refer to all asylum seekers who do so as illegal maritime arrivals.

In October 2012, the Labor government introduced “enhanced screening” for Sri Lankan asylum seekers arriving by boat, whereby immigration officials conduct cursory interviews with asylum seekers, who often have no access to legal representation or right to appeal. An unfavorable finding means the asylum seeker is immediately deported back to his or her country of origin. This policy poses a serious risk of refoulement, returning genuine refugees to face persecution and threats to their life and liberty. At this writing, the government had returned at least 1,191 Sri Lankans under this procedure.

In July 2013, the United Nations Human Rights Committee found that Australia had breached the International Covenant on Civil and Political Rights and committed 143 human rights violations by indefinitely detaining 46 refugees on the basis of Australian Security Intelligence Organisation “adverse security assessments.” The committee directed Australia to provide the refugees with an effective remedy, including release from detention, rehabilitation, and compensation. So far, the government has yet to act on the committee’s recommendations.

Australia has continued the practice of mandatory detention for those arriving in Australia without a visa. As of September 30, 2013, 6,403 people were in secure immigration detention facilities (onshore and offshore), including 1,078 children; 106 people had been in detention for more than two years.

Another deterrent measure is the offshore processing of asylum seekers on Manus Island, Papua New Guinea, and Nauru. Offshore processing was first implemented in 2001 and subsequently abandoned in 2008, only to be reintroduced by the Labor government in August 2012. In July and August 2013, the Australian government concluded agreements with Papua New Guinea and Nauru through which all asylum seekers who arrive in Australia by boat after July 19, 2013, are to be transferred to offshore processing centers. The United Nations High Commissioner for Refugees (UNHCR) has repeatedly expressed concern regarding the mandatory and indefinite detention of asylum seekers in offshore centers, where conditions are harsh and unsatisfactory and individuals get little help making their claims.

The new agreements mean that those found to be refugees, despite the limitations of the offshore processing system, will never be eligible for resettlement in Australia and instead will be permanently resettled in Papua New Guinea, Nauru, or another country.

Upon taking office in September, Prime Minister Tony Abbott declared his intention to expand the offshore processing and regional resettlement arrangements and implement the government’s new “Operation Sovereign Borders” policy. The policy empowers military commanders to turn around boats at sea “where safe to do so.” The new government stopped referring asylum seekers to refugee casework organizations. Abbott also announced the reintroduction of temporary protection visas for the approximately 30,000 asylum seekers in Australia awaiting assessment of their refugee claims, though in December this was blocked in the Senate.

While some health and socioeconomic indicators are improving for indigenous Australians, they still on average live 10-12 years less than non-indigenous Australians, have an infant mortality rate almost two times higher, and continue to die at alarmingly high rates from treatable and preventable conditions such as diabetes and respiratory illness. Although they live in one of the world’s wealthiest countries, many indigenous Australians do not have access to adequate health care, housing, food, or water.

In March 2013, Parliament passed legislation recognizing indigenous Australians as the first inhabitants of Australia, an important step toward constitutional recognition and toward addressing Australia’s history of exclusion. As part of his election campaign, Prime Minister Abbott promised to propose a referendum on recognition within 12 months of taking office and to establish an indigenous advisory council. In September, he established the council to focus on “practical changes to improve the lives of Aboriginal people.” It is not clear what role this council will play relative to the national representative indigenous body, the Congress of Australia’s First Peoples.

In July 2013, the government introduced the National Disability Insurance Scheme, allowing people with disabilities to receive support based on their needs and be actively involved in choosing the types of support they need. Disability rights have also been a focal point in Australia’s international aid programs.

In 2013, the Australian Law Commission launched an inquiry into barriers to equal recognition before the law and legal capacity for individuals with disabilities. Current laws promote guardianship, which strips people with disabilities of their ability to make decisions about their lives instead of recognizing their legal capacity on an equal basis as others, as required by the Convention on the Rights of Persons with Disabilities (CRPD).

Alarmingly, Australian law allows women and girls with disabilities to be involuntarily sterilized if the family court or a guardianship tribunal determines that the procedure is in their best interests. A Senate committee review in 2013 merely recommended that the practice of involuntary sterilization be “regulated” rather than banned. In September 2013, the UN Committee on the Rights of Persons with Disabilities (CRPD Committee) urged the Australian government to take immediate steps to prohibit involuntary sterilization and provide assistance enabling people with disabilities to make decisions about their own lives (supported decision-making).

Shackles and restraints are often still used on people with mental disabilities in Australia, sometimes because of lack of beds in psychiatric wards in public hospitals. According to local disability advocates, women with mental disabilities experience a high rate of physical and sexual abuse, including in psychiatric facilities. The CRPD Committee recommended that the government develop more inclusive gender-based violence prevention programs and ensure access for women with disabilities to an effective, integrated redress mechanism.

Cohabiting same sex couples are accorded de facto status and civil unions are recognized in some states. Marriage, however, remains restricted to heterosexual relationships under the federal Marriage Act.

The Australian Capital Territory became the first state or territory in Australia to recognize same-sex marriage with the passage of the Marriage Equality Act in October 2013. The Federal Government later signaled its intention to challenge the new law in the High Court.

Long overdue amendments to the Sex Discrimination Act in August 2013 made discrimination on the basis of sexual orientation, gender identity, intersex status, and relationship status unlawful in Australia. However, exemptions for religious organizations mean that, for instance, religious schools can continue to refuse to admit or expel LGBTI students.

In September 2013, the High Court rejected an appeal by three award-winning journalists working for the Age newspaper who refused to comply with an order to disclose their confidential sources in a defamation case for articles written in 2009. The journalists face charges of contempt of court, which could lead to fines and imprisonment if they refuse to reveal their sources.

Since the publication of these articles, shield laws protecting journalistic sources have been introduced in six of the nine legal jurisdictions in Australia. In these jurisdictions, there is now a presumption that journalists do not have to reveal their sources. The presumption can be overridden where the benefit of disclosure would outweigh the harm. Whether these new shield laws will offer adequate protection remains to be seen. No such protections exist in Queensland, South Australia, and the Northern Territory.

Australia held a two-year rotating seat on the UN Security Council starting in 2013. It used its presidency of the Security Council in September to push for a resolution restricting the trade in and distribution of small arms and light weapons and a presidential statement on humanitarian access in Syria. The government continued its leadership role in international disarmament by presiding over the successful final Arms Trade Treaty negotiations in New York.

Despite calls for a boycott over lack of war crimes accountability in Sri Lanka, Australia sent a high-level delegation to the Commonwealth Heads of Government Meeting (CHOGM) in Colombo in November 2013. Prime Minister Abbott and Foreign Minister Julie Bishop repeatedly sidestepped or downplayed the importance of accountability and respect for human rights. Most egregiously, Abbott, addressing allegations of torture by Sri Lankan security forces, defended the Sri Lankan government, saying “We accept that sometimes, in difficult circumstances, difficult things happen.”

This rationalization of torture, which was endemic during the war years and continues to be a serious problem in Sri Lanka today, seems to have been motivated in part by the goal of enlisting Sri Lanka’s support in preventing asylum seekers from leaving Sri Lanka for Australia, and, on the same visit, Abbott announced a gift of two patrol boats to the Sri Lankan navy to combat people smuggling. The Australian government was seemingly oblivious to the role Sri Lankan government abuses play in prompting outflows of ethnic Tamil asylum seekers.

Abbott continued his predecessors’ foreign policy focus on the Asia-Pacific region, declaring he would be an “Asia-first” prime minister. He also continued the practice of turning a blind eye to human rights abuses in neighboring countries. Abbott made Indonesia his first foreign visit as head of state in September in order to seek cooperation on combatting “people smuggling,” with no mention of the rights of those seeking asylum. Australian aid remained focused on Asia and the Pacific, with Indonesia and Papua New Guinea the top two aid recipients. In September, the government said it would slash Australia’s aid budget by US$4.2 billion over the next three years, reducing foreign aid spending from 0.37 percent to 0.32 percent of gross national income.