Even though Canada holds itself out as a refugee-welcome and multicultural country, every year the federal government incarcerates thousands of people seeking safety or a better life.

Between April 2019 and March 2020, almost 9,000 people were in Canadian immigration detention, including 138 infants and children.

Canada is among the only countries in the global north without a legal limit on the length of time people can be in immigration detention.

During the Covid-19 pandemic, Canadian authorities released numerous people from immigration detention, proving that there are viable alternatives to locking people up with no clear end in sight.

Our #WelcomeToCanada campaign is going coast to coast. The federal government has contracts with provinces across Canada that allows for immigration detainees to be held in provincial jails.

Call on the federal government of Canada to cancel these contracts!

Email the Prime Minister of Canada to give people the #WelcomeToCanada they deserve.

In a major win for migrant & refugee rights, BC, Nova Scotia, Alberta & Manitoba have become the first Canadian provinces to end immigration detention in their jails! Join the call to PM @JustinTrudeau to follow suit across Canada. #WelcomeToCanada 📢 welcometo-canada.org

We believe Canada should uphold its welcoming reputation by treating all people with the dignity and respect they deserve.

Human Rights Watch and Amnesty International have documented human rights violations in immigration detention in Canada. Between April 2017 and March 2020, more than a fifth of immigration detainees – about 5,400 – were held in 78 provincial jails across Canada, many of which are maximum security facilities. People held in immigration detention are restricted to small spaces and under constant surveillance. In provincial jails, many are confined in dangerous environments where they may be subjected to violence.

People who are from communities of colour, particularly those who are Black, appear to be incarcerated in immigration detention for longer periods and often in provincial jails rather than immigration holding centres.

People with mental health conditions face discrimination throughout the detention process. Immigration detention also has long-term consequences that ripple beyond immigration detainees and affect their children, other loved ones, and communities.

There are viable alternatives to immigration detention! Instead of returning to business-as-usual after the Covid-19 pandemic, Canada has a real opportunity to overhaul its immigration and refugee protection system in a way that prioritizes human rights and mental health.

We are asking all Canadians to call on their leaders in government to cancel the immigration detention contracts between the provincial and federal governments and stop using provincial jails to lock up people seeking safety or a better life in Canada. 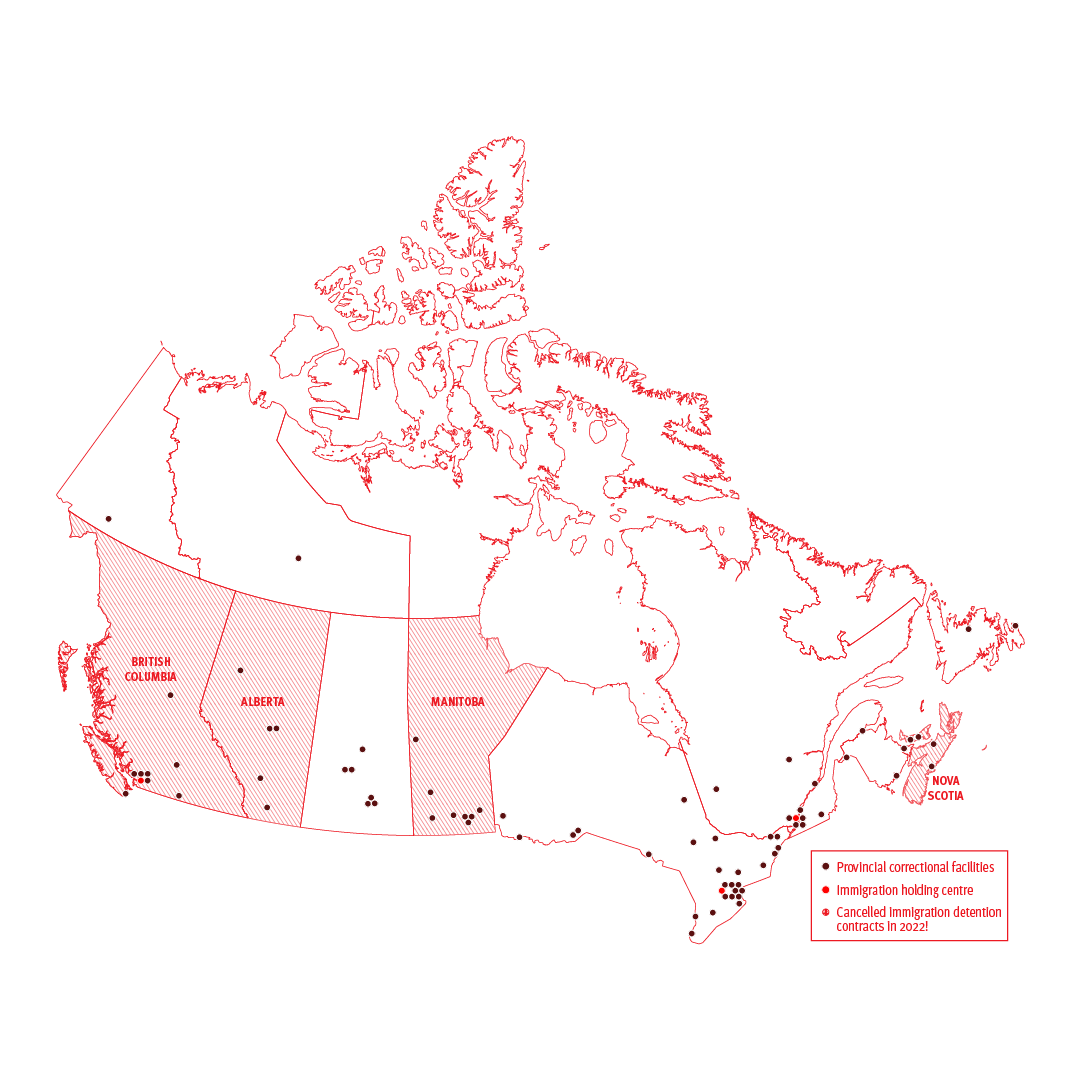 “I was seven when I came to Canada from Afghanistan. I’ll never forget the border officers handcuffing my parents… Now, I’m studying to become a refugee lawyer so that others can have a better Canadian story.”

- “Amina,” held in an immigration detention facility as a child in 2007

Immigration detainees are held for non-criminal purposes but endure some of the country’s most restrictive confinement conditions, including maximum-security provincial jails and solitary confinement, with no set release date.

“I fled to Canada to seek protection. I was arrested without charges and my belongings were taken, including the batteries for my hearing aid.”

- Abdelrahman Elmady, a man with a hearing disability held in three British Columbia jails in 2017

- “Joseph,” former immigration detainee held in a provincial jail in 2020

“It’s been ten years since I was put in immigration detention… Hearing the sound of keys jangling takes me right back to the jail, with guards on their rounds… When I see a border officer, I have panic attacks.”

- Sara, a woman fleeing persecution in Mexico held in a BC jail in 2012

The Canada Border Services Agency has sweeping police powers but remains the only major law enforcement agency in Canada without independent civilian oversight.