The 84-page report, “The Blood of People Who Don’t Cooperate: Continuing Torture and Mistreatment of Detainees in Bahrain,” concludes that security forces have continued the same abuses the Bahrain Independent Commission of Inquiry (BICI) documented in its November 2011 report. The commission was established after the fierce repression of pro-democracy demonstrators in February and March of that year. Bahraini authorities have failed to implement effectively the commission’s recommendations relating to torture, Human Rights Watch found. 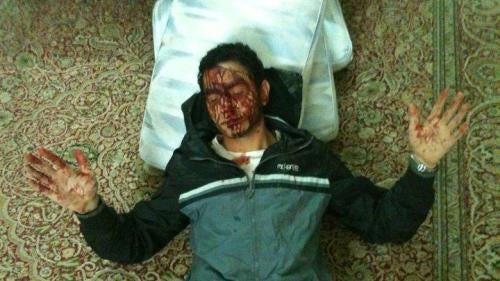 “The claims of Bahrain and its allies that authorities have ended torture in detention are simply not credible,” said Joe Stork, deputy Middle East director. “All the available evidence supports the conclusion that these new institutions have not effectively tackled what the BICI report described as a ‘culture of impunity’ among security forces.”

The United Kingdom has taken the lead internationally in arguing that Bahrain has reformed its security forces and accountability mechanisms, as the BICI mandated, but Human Rights Watch found the operations of those mechanisms seriously flawed.

“The Blood of People Who Don’t Cooperate”

Continuing Torture and Mistreatment of Detainees in Bahrain

In 2012 and again in 2013, Bahrain postponed indefinitely the scheduled visit to the country of the United Nations special rapporteur on torture.

Human Rights Watch interviewed 10 detainees who said they endured coercive interrogations at the Interior Ministry’s Criminal Investigations Directorate (CID) and in police stations since 2012, and four former inmates of Jaw prison, who said authorities had tortured them in March 2015.
All said security officers had physically assaulted them. Several described being subjected to electric shocks; suspension in painful positions, including by their wrists while handcuffed; forced standing; extreme cold; and sexual abuse. Six said that the CID interrogators boasted of their reputation for inflicting pain on detainees.


“I’ll show you why Wifaq [Bahrain’s leading opposition party] calls Bahrain the capital of torture,” a former detainee quoted an interrogator as telling him. Another said a CID officer held something to his nose and told him it was “the blood of people who don’t cooperate.”

King Hamad appointed the BICI in July 2011 in response to international criticism of the security forces’ violent and disproportionate response to largely peaceful anti-government protests that began in February 2011. The BICI concluded in its report, released on November 23, 2011, that the National Security Agency and the Interior Ministry “followed a systematic practice of physical and psychological mistreatment, which in many cases amounted to torture, with respect to a large number of detainees in their custody.”

The BICI’s recommendations led the government to establish three bodies since 2012 – the Office of the Ombudsman in the Interior Ministry, a Special Investigations Unit (SIU) in the Office of the General Prosecutor, and the Prisoners and Detainees Rights Commission (PDRC) – with a collective mandate to end torture in interrogation and detention facilities.

Human Rights Watch found, though, that little information is available from those bodies about complaints, investigations, and prosecutions. Since Bahrain announced the institutional reforms in early 2012 there has been only one prosecution for torture and none relating to detentions associated with Bahrain’s political unrest.

Bahrain should issue an immediate and open invitation to the UN special rapporteur on torture to conduct a country visit and allow unfettered access to detainees and all places of detention, Human Rights Watch said. Bahrain should ensure the independence of the Office of the Ombudsman and the PDRC by removing them from the Ministry of Interior and taking steps to guarantee the independence of the SIU from the Office of the Public Prosecutor, which has until now failed to establish a record of holding perpetrators of torture accountable.

Human Rights Watch further recommended that the government set up a civilian oversight committee, including well-regarded independent experts, to scrutinize the work of the SIU and ensure its independence from the Interior Ministry and public prosecution.

“Since the peaceful anti-government protests of 2011, which the authorities responded to with brutal and lethal force, the Bahrain government has overseen a campaign of incarceration that has decimated its pro-democracy movement,” Stork said. “Bahrain can’t claim any progress on torture while its anti-torture institutions lack independence and transparency and until it takes some serious steps to address the complete lack of accountability for the abuse of detainees.”