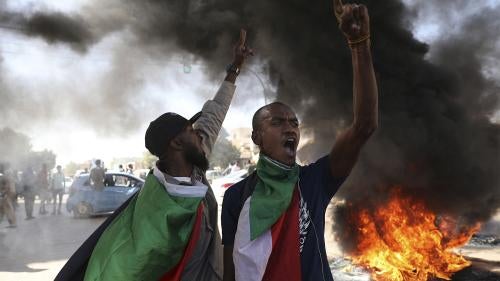 Sudan’s first year of a three-year transition to democratic rule following the dramatic ouster of President Omar al-Bashir in 2019, was marked by a failing economy, political tensions and continuing popular protests for justice and reforms. These challenges were compounded by the Covid-19 pandemic.

The government introduced some reforms but has not yet implemented most of the institutional and law reforms called for in the August 2019 constitutional charter.

Authorities did not release the results of a national investigation into the violent crackdown on protesters in Khartoum on June 3, 2019, in which more than 120 people were killed. In June, the International Criminal Court (ICC) took into custody its first suspect of serious crimes committed in Darfur.

On August 31, the government and a coalition of rebel groups signed a peace deal in Juba that would end the country’s internal armed conflicts and provide for cooperation with the ICC in its Darfur investigation, and establishing a national special court for Darfur crimes.

As the Covid-19 pandemic hit, about 6 million children were forced out of school due to school closures, and human rights groups reported a surge in domestic violence.

Donors pledged hundreds of millions of US dollars to support Sudan, while US President Donald Trump announced that the US would lift the state-sponsor of terrorism designation; Sudan and Israel officially agreed to normalize relations.

Authorities repealed an abusive public order law, outlawed female genital mutilation, removed the death penalty and lashing as punishments for consensual same-sex conduct and many other offenses, and abolished apostasy as a crime. However, many of the other reforms envisioned in the 2019 Constitutional Charter were not implemented.

The government has yet to set up a legislative council and key transitional commissions. It has not embarked on security sector reform beyond renaming the National Intelligence and Security Service (NISS) as the General Intelligence Service (GIS) and removing its arrest and detention powers.

The committee to investigate the violent dispersal of protests in Khartoum on June 3, in which more than 120 were killed, has not released its findings. Victims’ families and activists have strongly criticized its slow pace as well as its lack of witness protection and sexual and gender-based violence expertise.

The Attorney General’s Office formed several committees to investigate past crimes and rights abuses including in Darfur, but no investigation has yet led to prosecutions. Authorities announced the discovery of two mass graves during the year they said contain the remains of military personnel killed during al-Bashir’s rule.

On February 11,  a member of the sovereign council, a collective presidency body composed of both civilians and military, publicly announced the government’s commitment to cooperate with the ICC, which officials reaffirmed throughout the year.

On June 9, the ICC prosecutor announced that a Janjaweed militia leader, Ali Mohamed Ali (“Kosheib”), surrendered to the ICC in the Central African Republic and is currently facing charges at the Hague. ICC arrest warrants for al-Bashir, two former officials, and a rebel leader are outstanding. Al-Bashir and the two former officials are detained in Khartoum.

The ICC prosecutor visited Khartoum in October and discussed with Sudanese officials modalities of cooperation, including on the execution of outstanding arrest warrants.

Ex-President al-Bashir is currently standing trial alongside other former officials for undermining the constitutional order due their role in the 1989 coup against Sudan’s last elected government.

In Khartoum, on June 30, the one-year anniversary of a major protest following al-Bashir’s ouster, police responded with violence, killing one protester and injuring several. On August 17,  on the anniversary of the power-sharing deal, police used tear gas and whips against protesters gathered in front of the prime minister’s office, arresting and injuring many.

On October 15, security forces killed at least eight and injuring others in the eastern state of Kassala. Protests were called for by tribal leaders of Beni Amir after the dismissal of the state governor by the prime minister. A protester was also killed by security forces in Khartoum on October 21.

Security officials continued to arbitrarily detain civilians. Throughout the year Rapid Support Forces (RSF) reportedly detained several members of the Mahamid Arab tribe due to their links to Musa Hilal, the former pro-government militia leader who is subject to UN sanctions for his role in Darfur atrocities.

RSF officials detained Abdulmalik Musa Saleh, a political activist and a relative of Hilal, several times during the year in Khartoum, and Osama Mohamed al-Hassan, 40, also an activist, from July 5 until September 17. At time of writing, while neither man is in custody, neither have they been charged with any offence and were never brought to court throughout their detention.

Hilal has been detained since November 2017 and is reportedly facing charges by a military court for crimes against government forces in Darfur.

On June 29, the former military governor of West Darfur ordered the imprisonment of 72 men and boys for six months under the emergency law, which allows authorities to detain people without judicial oversight. They were among a group of 122 arrested by the RSF in the preceding weeks during counter migration operations in Darfur.

Authorities charged them with crimes including looting, illegal migration, and illegal possession of firearms. They were never brought to trial.

Government security forces arrested and detained civilians in Kutum, North Darfur, and Kass, South Darfur, following protests in both locations. At least one of the released detainees from Kutum held by military officials told Human Rights Watch he was subjected to ill-treatment that could amount to torture while in detention.

In September, 11 artists were sentenced to two months in prison for being a “public nuisance” and “disturbing public peace,” in part because of pro-democracy chants they shouted while in the police station.

In July, the transitional government amended the 2007 Cybercrimes Act, increasing its penalties rather than repealing vaguely worded offenses criminalizing the “spread of false news” and publication of “indecent materials.” On July 18, the Sudanese army appointed a special commissioner to bring lawsuits against individuals who “insult” the military online, both inside and outside the country.

On January 7, the “dismantling committee,” set up to tackle corruption and repossess stolen assets and properties by the former ruling party, suspended Al-ray al-am and al-Sudani newspapers and two private TV channels for alleged financial links to al-Bashir’s regime. The committee lacks judicial oversight and has faced criticism for being a political tool.

Conflict in Darfur and Eastern Sudan

In Al Geneina, West Darfur, fighting between Arab and Masalit communities flared in December 2019, six months after UNAMID forces had withdrawn from their base there. Armed militia groups, including members of the RSF, attacked a camp for displaced people and killed dozens of people, including children, raped women, and girls, destroyed schools, and burned homes, causing tens of thousands to flee.

On July 25, armed Arab militia attacked the town of Misteri, West Darfur. The attackers targeted ethnic Masalit, according to media. The UN said at least 60 were killed in the attack.

In June, the European Union, Germany, the UAE, and Sudan co-hosted the Sudan Partnership Conference in Berlin. Donors pledged over $1.8 billion.

During the year, the EU encouraged and supported Sudan’s ongoing peace efforts and democratic transition. The EU and its member states reiterated calls to the Sudanese authorities to secure justice for past atrocity crimes, including through full cooperation with the ICC, and to take concrete legislative and policy steps to advance protection of human rights. The EU welcomed Sudan’s decision to ban female genital mutilation.

In February, the UN Security Council extended the mandate of the Panel of Experts on Sudan another year. In July, the UN Office of the High Commissioner for Human Rights indicated that its country office in Khartoum was operational. In October, the UN Human Rights Council terminated the mandate of the independent expert on the situation of human rights in Sudan but kept Sudan on its agenda through reporting by the High Commissioner for Human Rights.

On October 19, President Trump announced the intention of the US administration to remove Sudan from its state sponsor of terrorism designation. The US Congress would need to approve this after being formally notified by the president. It followed months of negotiations in which Sudan agreed to pay US$335 million to victims of terrorist attacks that targeted US citizens abroad and led to Sudan’s designation in 1993.