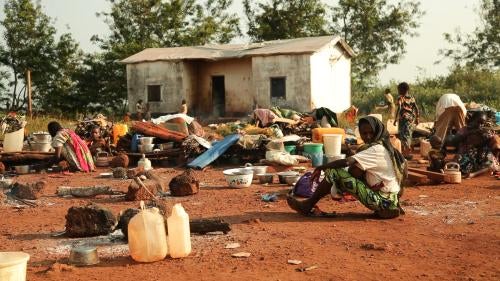 Attacks on civilians remained alarming and widespread in the Central African Republic, despite a decrease of violent attacks from the previous year. The sectarian violence between the predominantly Muslim Seleka rebels and the “anti-balaka,” a group harboring hatred towards Muslims, spread from western parts of the country toward central and eastern areas. Witnesses on both sides frequently described the attacks as retaliatory in nature, indicating a growing cycle of revenge killings. By the end of 2014, thousands of civilians had been killed by both sides and over 800,000 people displaced from their homes, of which an estimated 415,000 people, many of them Muslim, took refuge across the borders in neighboring countries. A transitional government, led by the interim president, Catherine Samba-Panza, appointed in January, struggled to establish security. A ceasefire agreement signed by the warring factions in July was widely ignored.

In April, the United Nations Security Council authorized a new peacekeeping mission for the Central African Republic, known as MINUSCA, to protect civilians, facilitate humanitarian access, and monitor, investigate, and report on human rights abuses. It took over from the African Union (AU) on September 15, integrating 4,800 AU troops into MINUSCA, and began deploying additional troops. At time of writing, 8,500 of the force’s potential 11,800 had been deployed. Approximately 2,000 French peacekeepers, authorized by the Security Council in late 2013, remained in the country.

Some AU peacekeepers, while providing important civilian protection during their deployment, also committed serious human rights abuses, although according to the UN Department of Peacekeeping Operations, those facing allegations were not integrated into MINUSCA.

Tackling impunity and re-establishing the rule of law remain a serious challenge. In September, the International Criminal Court (ICC) announced it would begin an investigation into war crimes and crimes against humanity committed in the country since 2012, following a referral from interim President Samba-Panza.

The Seleka (“alliance” in Sango, the country’s principal language), a predominantly Muslim rebel group that launched a coup d’etat in March 2013, were forced out of power in December 2013 following the deployment of French peacekeeping forces. The Seleka re-established their military base in Bambari, a city in the center of the country, from where they sought to control eastern and northern areas.

The Seleka continued to carry out brutal attacks against civilians often under the pretext of seeking out their enemies, the anti-balaka fighters. The Seleka destroyed villages, engaged in wide spread looting, and raped women and girls. For example, on February 26, Seleka fighters, aided by ethnic Peuhl cattle herders, killed eight people and wounded at least 10 others—mostly young children—in the village of Bowai, northeast of Bossangoa. In a similar attack in June in Liwa, near Bambari, Seleka rebels together with ethnic Peuhl killed at least 10 people and then burned down the entire village. Civilians were also attacked in or near their villages along roads that Seleka rebels considered to be strategic. In June, scores of civilians were killed in and around Bakala, just to the north of Bambari and near several gold mining sites. A number of the victims were tied up before the Seleka slit their throats.

Rival factions within the Seleka vied for control of the group, sometimes through armed attacks against each other, leading to the death of scores of Seleka fighters in Bambari in September. Several civilians were also killed in the attacks.

The anti-balaka, a collection of local armed groups that emerged in mid-2013 to fight against the Seleka, continued to commit large-scale reprisal attacks against Muslim civilians and later against non-Muslim civilians. The majority of Muslims fled from the capital and the west of the country. Thousands were trapped in enclaves, such as in Carnot and Boda, where they lived in precarious conditions with peacekeepers attempting to provide some protection. In February, at least 72 Muslim civilians were killed by anti-balaka forces in the southwest of the country. In one incident on February 5 in Guen, the anti-balaka attacked a property where hundreds of Muslims had sought refuge. The attackers divided some 45 men into two groups, led them out of the compound, forced them to lie on the ground, and executed them. The attackers pursued the fleeing Muslims to the nearby town of Djomo, where many Muslims sought shelter in a Catholic parish. The anti-balaka continued to attack them there.

The anti-balaka also attacked Muslims in central and eastern areas. In June, anti-balaka forces attacked an ethnic Peuhl community at Ardondjobdi, near Bambari, as the men were finishing their morning prayers. At least 20 people, including women and children, were killed, the majority from machete blows to the head and neck. Three victims’ throats were cut while they were still inside the local mosque.

The situation for the estimated 800,000 refugees and internally displaced persons remained serious, with only a small number feeling secure enough to come home. In western areas, roughly 12,000 Muslim civilians lived in isolated enclaves protected by AU, and later UN peacekeepers, too frightened to return. In Bangui, civilians living in one of the city’s largest Muslim neighborhoods, called “ 5 Kilo,” remained isolated from the rest of the city, fearing attack if they left the area.

Displacement camps and other locations where civilians sought safety were frequently attacked by armed fighters from both sides. On May 28, a displacement camp in Bangui’s Fatima neighborhood was attacked by armed Muslim men from 5 Kilo after anti-balaka fighters attacked the Muslim enclave. In Bambari at least 27 civilians were killed by Seleka fighters and their allies in July while taking shelter in a displacement camp at the Saint Joseph Parish and the adjacent bishop’s residence. In both attacks, AU and French peacekeepers were stationed within a few kilometers but were unable to respond quickly enough to protect civilians.

Lack of humanitarian assistance remained a major problem for the displaced. The UN Office for the Coordination of Humanitarian Affairs and other humanitarian organizations cited insecurity as a major obstacle in delivering much needed life-saving assistance.

In March, Chadian peacekeepers with the AU mission were accused by the transitional government of firing indiscriminately at civilians in Bangui’s PK 12 neighborhood, killing dozens of people. Following a public outcry, the Chadian government withdrew its 850 troops from the AU peacekeeping mission.

On April 9, interim President Samba-Panza issued a decree establishing a special investigative cell to investigate and prosecute serious crimes committed in the country since 2004. The UN peacekeeping mission also consulted with the transitional government on the establishment of a judicial mechanism to enable the country’s judiciary to work alongside international actors to tackle impunity.

In August, the peacekeeping mission and the government signed a Memorandum of Understanding to create a Special Criminal Court to try grave human rights violations and violations of international humanitarian law. In the memorandum, the government commits to take the necessary legislative steps as soon as possible to create the special court.

On September 24, the ICC prosecutor announced that her office would open a second investigation in the country for crimes committed since 2012, following an earlier request from interim President Samba-Panza. In 2007, the ICC opened its first investigation in the country for crimes committed during the 2002-2003 civil war. The investigation led to the arrest of Jean-Pierre Bemba Gombo, a Congolese national and former vice president of the Democratic Republic of Congo. His trial was ongoing at the ICC at time of writing.

Regional African actors and France took a lead in responding to the crisis. Chad and the Republic of Congo each hosted conferences aimed at establishing frameworks for peace. France increased its peacekeeping troops to an estimated 2,000 soldiers.

In April, the Security Council authorized the deployment of a new peacekeeping mission and in May imposed sanctions on former President Francois Bozize and two other rebel leaders for their role in the violence. The United States and the European Union provided important financial support to peacekeeping efforts in the country. In addition the US has provided more than US$145 million in humanitarian aid to help those affected by the conflict in CAR, including for refugees outside the country.

In August, the secretary-general reported to the Security Council that civilians were the targets of sectarian violence and reprisal killings every day and serious violations of human rights and international humanitarian law were committed with total impunity.