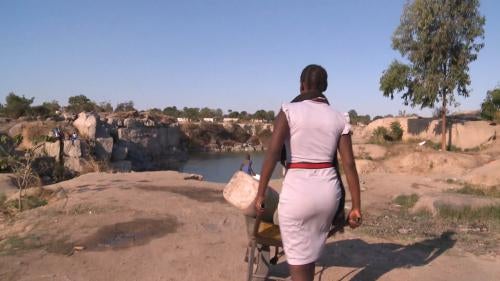 The water situation in Harare is largely the same as in 2008, when Zimbabwe experienced the most devastating cholera outbreak in Africa in 15 years. The outbreak killed 4,200 people and infected at least 100,000. Human Rights Watch found that the city’s perennial water crisis, which is linked to the cholera outbreak, is the result of the city’s obsolete water infrastructure, a ballooning population, severe droughts, and pervasive government corruption and mismanagement. Poor governance and disputes between the central government and the Harare City Council have hindered efforts to address the problems.

Millions of residents in Harare, Zimbabwe have not had access to clean water for years.

Sometimes we get city council water in the taps, it is not clean, we cannot drink it because it smells badly, we cannot use it to cook.

People rely on water from boreholes…

many of which are contaminated.

Harare City Council and the [central] government should collectively find a sustainable solution to ensure daily access to potable water in the city.

It is everyone’s right in Zimbabwe to have access to safe, clean water that we can drink.