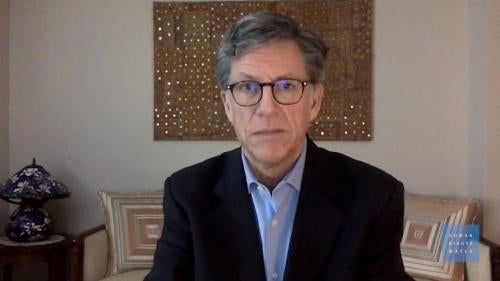 We thank the High Commissioner for Human Rights for her reporting on Venezuela, which details serious abuses.

The policies and practices by Venezuelan authorities under Nicolás Maduro have long endangered the lives of thousands of Venezuelans.

Now that the pandemic has exacerbated the pre-existing humanitarian crisis, it is essential that sufficient apolitical humanitarian assistance reaches the country.

Recently, the Supreme Court of Justice orchestrated the takeover of three opposition parties and appointed government supporters [to leadership positions], violating the right to free and fair elections and freedom of association.

More than five million Venezuelans fled the crisis at home.

Tens of thousands returned and are being harassed by the authorities. Many are forced to remain in overcrowded quarantine centers without access to water.

Justice is indispensable for the country, but is impossible in a country without judicial independence, as the High Commissioner has just reported.

The creation, by this Council, of a Fact-Finding Mission to investigate abuses in Venezuela was extremely important.

Since the government refuses to cooperate with these independent experts, we ask the High Commissioner to please indicate how she intends to share information on abuses with this mechanism of the United Nations Human Rights Council.