New York City police planned the assault and mass arrests of peaceful protesters in the Mott Haven neighborhood of the South Bronx on June 4, 2020, Human Rights Watch said in a report released today. The crackdown, led by the department’s highest-ranking uniformed officer, was among the most aggressive police responses to protests across the United States following the police killing of George Floyd in Minneapolis, Minnesota, and could cost New York City taxpayers several million dollars in misconduct complaints and lawsuits.

The 99-page report, “‘Kettling’ Protesters in the Bronx: Systemic Police Brutality and Its Costs in the United States,” provides a detailed account of the police response to the June 4 peaceful protest in Mott Haven, a low-income, majority Black and brown community that has long experienced high levels of police brutality and systemic racism. It describes the city’s ineffectual accountability systems that protect abusive police officers, shows the shortcomings of incremental reforms, and makes the case for structural change.

About 10 minutes before an 8 p.m. curfew – imposed after looting elsewhere in the city – scores of police officers surrounded and trapped the protesters – a tactic known as “kettling” – as they marched peacefully through Mott Haven. Just after 8 p.m., the police, unprovoked and without warning, moved in on the protesters, wielding batons, beating people from car tops, shoving them to the ground, and firing pepper spray into their faces before rounding up more than 250 people for arrest

“The New York City police blocked people from leaving before the curfew and then used the curfew as an excuse to beat, abuse, and arrest people who were protesting peacefully,” said Ida Sawyer, acting crisis and conflict director at Human Rights Watch and co-author of the report. “It was a planned operation with no justification that could cost New York taxpayers millions of dollars.” 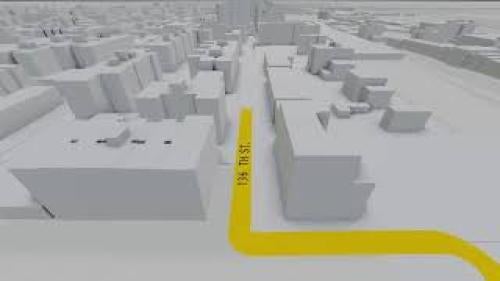 Human Rights Watch interviewed or reviewed written accounts from 81 people who participated in the protest and 19 other community members, lawyers, activists, and city officials, and analyzed 155 videos recorded during the protest. The New York Police Department (NYPD) replied in part to Human Rights Watch’s questions about the protest but did not respond to a request to interview senior police officials.

As Chantel Johnson made her way through her South Bronx neighborhood to meet up with protesters, one thought kept nagging her: Why the heavy police presence?

One protester described how an officer punched him in the face while another twisted his finger and broke it. “Then another cop sprayed me in the face with mace,” he said. “Then they dragged me on the ground and beat me with batons. Somewhere in the process of being cuffed, I had a knee on my neck.”

Most of those injured did not receive any immediate medical care, as police arrested or obstructed volunteer medics in medical scrubs with red cross insignia. Dozens of people spent hours in detention with untreated wounds and their hands bound behind their backs.

At least 13 legal observers – who wear clearly identifiable hats and badges – were also detained, in some cases violently, before being released. Video footage captures an official from the NYPD’s Legal Bureau instructing other officers: “Legal Observers can be arrested.… They are good to go!”

The NYPD’s highest-ranking uniformed officer, Chief of Department Terence Monahan, was present during the action, along with at least 24 other uniformed supervisory officers – chiefs, lieutenants, captains, or inspectors in white shirts.

Police arrested and took to jail at least 263 people, more than at any other protest in New York since Floyd’s killing. Some were released later that night; others the next afternoon. One was held for a week. Most were charged with Class B misdemeanors for curfew violations or unlawful assembly. They were given summonses or desk appearance tickets with court dates in early October. On September 3, the Bronx District Attorney filed to dismiss the summonses, and on September 25 the Bronx District Attorney’s office informed Human Rights Watch that the desk appearance tickets will also be dismissed.

New York Police Commissioner Dermot Shea confirmed the premeditated nature of the operation, stating at a news conference the next day: “We had a plan which was executed nearly flawlessly in the Bronx.” Shea described the protest as an attempt by “outside agitators” to “cause mayhem,” “tear down society,” and “injure cops.” Human Rights Watch found that the protest, organized by activists from the Bronx, was peaceful until the police responded with violence.

In the police department’s response to Human Rights Watch’s questions, the department said that, “upon 8 p.m.,” the demonstration “was unlawful under the Mayor’s Executive Order establishing the curfew,” and that the detention of nonessential workers “was lawful.” The department also said that “legal observers did not enjoy an exemption as essential workers,” even though the Mayor’s office had clarified that legal observers were exempt from the curfew. The NYPD did not respond to questions about the violence it inflicted on protesters and observers or address why officers trapped the protesters before the curfew, blocking all paths to disperse.

The police conduct during the Mott Haven protest amounts to serious violations of international human rights law, and it also appears to violate civil rights protections of the US Constitution and the police department’s Patrol Guide.

About 100 protesters and observers have filed notice of their intent to sue the city. The city paid out $36 million for civil rights violations and related legal fees after police kettled and mass-arrested protesters in a similar manner in 2004. Current Chief of Department Terence Monahan was also a key player during those operations.

New York state and city officials should make structural changes to reduce the police role in addressing societal problems, including through significant decreases to the police force size and budget, Human Rights Watch said. The government should instead invest in real community needs, including through support to services that directly address underlying issues such as homelessness and poverty and that improve access to quality education and health care. They should also empower independent accountability systems to provide a genuine check on police misconduct.

“Instead of cracking down on peaceful protesters and stifling their calls for change, policymakers in New York City and across the country should listen to their demands,” Sawyer said. “Local governments should finally do what it takes to end the structural racism and systemic police abuse that people in Mott Haven and communities like it have long experienced.”