Devastating Toll on Teachers, Students, and Schools
Published in 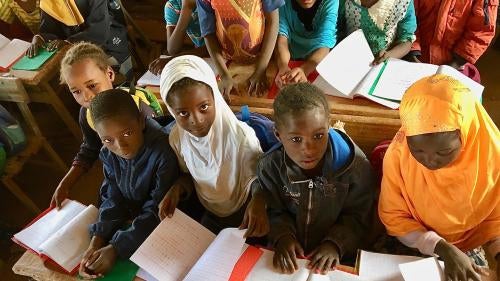 (New York) – Increasing armed Islamist group attacks on teachers, students, and schools in Burkina Faso since 2017 have had a devastating impact on children’s access to education, Human Rights Watch said in a report released today.

The 102-page report, “‘Their War Against Education’: Armed Group Attacks on Teachers, Students, and Schools in Burkina Faso,” documents scores of education-related attacks by armed Islamist groups in 6 of the country’s 13 regions between 2017 and 2020. The groups have killed, beaten, abducted, and threatened education professionals; intimidated students; terrorized parents into keeping children out of school; and damaged, destroyed, and looted schools.

“Armed Islamist groups targeting teachers, students, and schools in Burkina Faso are not only committing war crimes, but are undoing years of progress in improving children’s access to education,” said Lauren Seibert, children’s rights researcher at Human Rights Watch and author of the report. “The Burkinabè government should investigate these attacks, ensure children regain access to schooling, and provide needed support to education workers who experienced attacks.”

“Their War Against Education”

Armed Islamist groups allied with Al Qaeda and the Islamic State began attacking teachers and schools in Burkina Faso in 2017, citing their opposition to “French,” Western-style education and government institutions. The attacks have increased every year since.

Teachers and school administrators described being chained, tied, blindfolded, and beaten, with their belongings stolen or burned. Those killed include five teachers shot at a primary school; a teacher and a principal shot at home; four teachers and administrators abducted and killed, including two beheaded; and a retired volunteer teacher gunned down as he tutored children.

In a May 2020 letter to Human Rights Watch, the education ministry reported that at least 222 education workers had been “victims of terrorist attacks” as of late April.

While armed Islamists have not appeared to target children for violence during school attacks, they often fired shots in the air to terrify students and teachers. “I was really scared. We thought they were coming to kill us,” a student recalled. A 14-year-old girl was killed by a stray bullet during a school attack in 2018. Seven students returning from school break were among the 14 people killed when an explosive device detonated under their bus in January 2020.

A Survivor Tells How Armed Islamists Attacked Students and Colleagues

Armed men damaged or pillaged schools in at least 84 of the documented cases, including by burning school infrastructure and academic materials, setting off explosives, shooting at schools, and plundering supplies from canteen storerooms.

Before the Burkinabè government closed all schools nationwide in mid-March in response to the Covid-19 pandemic, 2,500 schools had already closed due to attacks or insecurity, depriving nearly 350,000 students of access to education.

“All the schools here are closed [because of attacks and insecurity],” said an education professional in Namssiguia village, Centre-Nord region, in February. “We pray the situation will improve so the children can go back to school, because they are suffering.”

Violence by armed Islamist groups in Burkina Faso – and, in response, by self-defense militias and government security forces – has steadily increased since the emergence of the Burkinabè armed Islamist group Ansaroul Islam in 2016. A surge in attacks in 2019 continued into 2020, displacing over 830,000 people from their homes.

The use of schools for military purposes, such as converting them into military bases, also puts education infrastructure at risk. Human Rights Watch documented the use of ten schools by Burkinabè security forces and six by armed Islamist groups, as well as armed Islamist attacks on four schools during or directly after their occupation by the Burkinabè military.

The attacks have had far-reaching consequences for students and teachers, including trauma and mental health issues, school withdrawals, dangers for children traveling to access new schools, and, among out-of-school children, increased child labor and risks of child marriage for girls.

In 2017, Burkina Faso endorsed the Safe Schools Declaration, a political agreement committing countries to prevent and respond to attacks on students, teachers, and schools. The government has since taken several positive steps, such as reopening closed schools, redeploying teachers, and creating a national strategy and technical secretariat on education in emergencies. Recently, the government expanded distance-learning programs – previously implemented in some conflict-affected regions – to national radio and television, as part of its Covid-19 education response.

However, the government should urgently address gaps in its response to education-related attacks. It should ensure timely psychosocial and financial support to victims, increase support to overcrowded “host schools” accepting displaced students, expand “education-in-emergencies” programs to reach more children affected by conflict, improve school security in conflict zones, and restrict military use of schools. Those responsible for attacks should be investigated for war crimes and appropriately prosecuted.

Donor governments should consider supporting education-in-emergencies programs and victim rehabilitation, including psychosocial care for teachers and students who experienced attacks.

“In their brutal assault against education, armed Islamist groups in Burkina Faso have cost teachers their lives, livelihoods, and physical and mental health, and they are costing hundreds of thousands of children their futures,” Seibert said. “These attacks need to stop.”

“They started beating [my colleague] first, then me... They said, ‘You knew we didn’t want you here teaching, and still you dared to continue... You have defied us.’ They said if they come back and take us a second time, it will be to remove our heads.”
– Teacher, victim of armed Islamist attack in Est region, February 12, 2020.

“The moment we saw [the armed Islamists], we ran. ... The principal told us they said they didn’t want to return and find us there [in school]. The school was closed for several months. ... It caused us a lot of problems. We couldn’t study, we had to stay at home.”
– Primary school student, 13, Kaya, Centre-Nord region, February 9, 2020.

“[The students] started climbing the walls to escape—the teachers too... One [attacker]... pointed his gun at me and said, ‘Any child, girl or boy... should be learning the Quran, not French.’... They ... put a handmade explosive on one of the computer tables. I heard an explosion, BOOM... I was so afraid.”
– High school administrator from Pissila, Centre-Nord region, February 13, 2020.

“The attack really disturbed me, so I haven’t been back to school. I’m not even planning to restart. I don’t have the spirit to go back.”
– Former high school student, 26, from Béléhédé village, Sahel region, February 14, 2020.

“The attack hurt me very much, but the fact that after the attack, we weren’t supported… that’s what still bothers me... we had the impression we were abandoned to ourselves.”
– School administrator, victim of an attack in 2018, Nord region, February 17, 2020.

“Since the threats began, schools have started to close in a cascade. ... I continue to teach, but it’s hard to concentrate... you have to look constantly out the window to see if there’s a danger.”
– High school teacher, Gourma province, Est region, February 7, 2020.

“This situation has created a psychosis... Students are no longer at ease being [in class] and doing their schoolwork. ... There has been pressure for teachers to stay and teach... But... they have [little] means to protect themselves. There is no warning and information system in place.”
– Souleymane Badiel, secretary-general of the Federation of National Unions for Education and Research Workers (F-SYNTER), Ouagadougou, December 12, 2019.

“Each day, the displaced students come... we don’t refuse enrollment, but if there isn’t any space they can’t start. ... Some classes have over 100 students.”
–Primary school principal in Kaya, Centre-Nord region, January 29, 2020.

“Because the number of [displaced] students is too high... the quality of teaching has suffered a blow.”
– Teacher at a school hosting displaced students in Dédougou, Boucle du Mouhoun region, January 22, 2020.

“With dropping schooling rates, many of the improvements made in recent years have been undone... The children who lose access to education are limited in opportunities. They will be more vulnerable, such as to artisanal gold mining; girls are more vulnerable to exploitation and abuse.”
– Souleymane Diallo, education quality and literacy program manager, Ouagadougou, December 8, 2019.