Yemen: Ramadan an Opportunity for Detainees 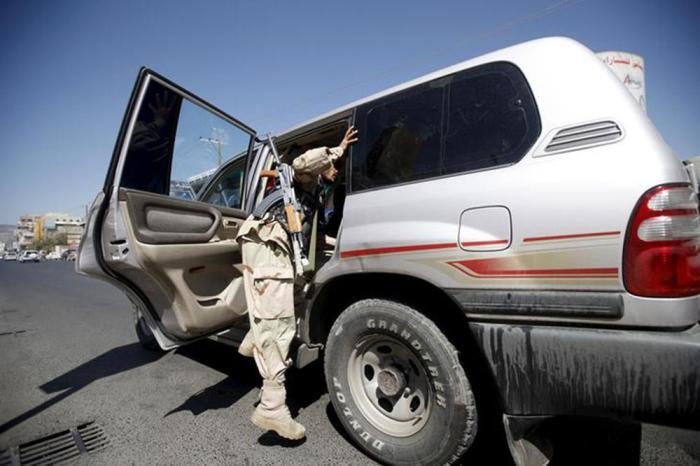 A Houthi fighter checks a van at a checkpoint on a street in Yemen's capital Sanaa October 21, 2015.

(Beirut) – The Muslim holy month of Ramadan, which begins on May 27, 2017 in Yemen, provides the parties to the armed conflict an opportunity to remedy the wrongful treatment of detainees, Human Rights Watch said today.

Houthi-Saleh forces, Yemeni-government forces, and forces backed by the United Arab Emirates should free those arbitrarily held, ensure detainees have access to lawyers and family members, and reveal the fate or whereabouts of those forcibly disappeared. The forces should also release children and others being needlessly held and hold to account officials responsible for mistreatment. It is common for governments in predominantly Muslim countries to release or pardon prisoners during Ramadan.

“Yemen’s warring sides can both meet their legal obligations and do what’s right by the Yemeni people by releasing those held arbitrarily during the holy month of Ramadan,” said Sarah Leah Whitson, Middle East director at Human Rights Watch. “They should also be informing detainees’ family members where and why their loved ones are being held.”

Human Rights Watch has documented arbitrary detention and enforced disappearances by Houthi-Saleh forces and pro-Yemeni government and UAE-backed security forces in the southern and eastern parts of the country, including in Aden, Abyan, and Hadramawt governorates. Human Rights Watch has also found that forces are detaining children suspected of loyalty to enemy forces, abusing detainees and holding them in poor conditions, and forcibly disappearing people perceived to be political opponents or security threats.

Human Rights Watch is not able to determine the total number of people currently detained by parties to the conflict, but Yemeni nongovernmental groups estimate it is in the thousands. In May 2016, the government of President Abdu Rabu Mansour Hadi and Houthi-Saleh forces agreed to exchange half of all prisoners in early June before Ramadan as part of ongoing peace talks. On May 30, 2017, the United Nations special envoy to Yemen, Ismail Ould Cheikh Ahmed, announced that he had received lists of prisoners from both sides, later reported to include 2,630 on the government side and 3,760 on the Houthi-Saleh side. While some prisoner exchanges were facilitated at local levels, a full exchange never occurred, and it is likely that thousands remain detained.

Houthi-Saleh Forces
Yemeni rights groups have documented hundreds of cases of people arbitrarily detained or forcibly disappeared by Houthi forces or forces loyal to former President Ali Abdullah Saleh. Human Rights Watch has documented 65 cases in which Houthi-Saleh forces arbitrarily detained or forcibly disappeared people, including two deaths in custody and 11 cases of alleged torture or other ill-treatment, including the abuse of a child.

Houthi-Saleh forces appear to have arrested many people because of their perceived links to Islah, a Sunni opposition party. They include Muhammad Qahtan, a senior Islah leader forcibly disappeared in April 2015. However, journalists, such as Salah al-Qaedi and Abdul-Khaliq Imran, as well as activists, have also been detained without charge for apparently political reasons.

Houthi-Saleh forces have also harassed and arbitrarily detained members of the Baha’i religious community, which the UN special rapporteur on freedom of religion or belief referred to as a “persistent pattern of persecution.” In April 2017, the authorities arrested Walid Ayyash, Mahmood Humaid, and Badi'u'llah Sanai, all members of the Baha’i community. Sanai was released one week later, but was rearrested in May. All three remain detained, their whereabouts unknown. Keyvan Qadari, an Iranian national who was born and lived his entire life in Yemen, has been detained since August, the last of five dozen Baha’is arrested en masse on August 10, apparently on account of their religion. Officials have threatened to deport Qadari to Iran, despite the clear risk he would face persecution or abuse.

Scores of detainees are being held at unofficial detention sites in territory controlled by Houthi-Saleh forces. Human Rights Watch has documented detentions at the Political Security Organization headquarters, at Zain al-Abdeen mosque in Hiziyaz, and at the National Security Bureau in Sanaa’s Old City.

The southern port city of Aden is currently home to multiple, often competing, security forces and militias. These forces are arresting and detaining people, and operating unofficial detention sites, local activists, journalists, and lawyers say. Given the rise in the number of security forces detaining people and the proliferation of detention facilities, families who know that their relatives have been taken into custody may not know why or where they are being held. A number of lawyers and activists have intervened to help families locate detained loved ones, but it frequently takes up to two months for a family to even determine who carried out the arrest, a local journalist said. Even after months of effort, some families have been unable to locate detained relatives.

Sarah Leah Whitson
Middle East director at Human Rights Watch
Yemen’s warring sides can both meet their legal obligations and do what’s right by the Yemeni people by releasing those held arbitrarily during the holy month of Ramadan.

In Aden, many of those arbitrarily detained or forcibly disappeared were arrested by “the Security Belt,” a force created in spring 2016. It is officially under the Interior Ministry but is funded, trained, and directed by the UAE, said several activists, lawyers, and government officials. The UN Panel of Experts on Yemen and the Center for Civilians in Conflict found that the Security Belt operated largely outside the Yemeni government’s control.

In Hadramawt, the UAE-backed “al-Nukhba,” also known as the Hadrami Elite Forces, has arbitrarily detained and forcibly disappeared dozens of men since spring 2016, when the Saudi-led coalition, in an effort led by UAE forces and supported by the United States, pushed Al-Qaeda in the Arabian Peninsula (AQAP) out of Mukalla, the governorate’s capital. The UN Panel of Experts investigated the forced disappearance of six people allegedly arrested by al-Nukhba between May and November 2016, including one who said he had been detained at al-Riyan airport. In May 2017, more than a dozen prisoners who had been held at the airport were released, according to family members, but dozens are believed to remain detained.

Under international human rights law, an enforced disappearance occurs when the authorities take someone into custody and deny holding them or fail to disclose their fate or whereabouts. “Disappeared” people are at greater risk of torture and other ill-treatment, especially when they are detained outside formal detention facilities, such as police jails or prisons.

While parties to Yemen’s armed conflict may take appropriate measures to address security concerns, international humanitarian and human rights law protect against mistreatment in custody, including not to be arbitrarily detained, tortured, ill-treated, or forcibly disappeared. At a minimum, those detained should be informed of the specific grounds for their arrest, be able to fairly contest their detention before an independent and impartial judge, have access to a lawyer and family members, and have their case periodically reviewed.

“War provides no justification for torture and ‘disappearance’ of perceived opponents,” Whitson said. “Yemen’s warring parties are putting themselves at risk of future prosecution if they don’t account for the people who are wrongfully detained and return them to their families.”
Middle East/North Africa
Yemen
Disappearances in Yemen
Detention Centers
Detention without Trial
Torture
United Nations
Source URL: https://www.hrw.org/news/2017/05/26/yemen-ramadan-opportunity-detainees