“I Still Need You” 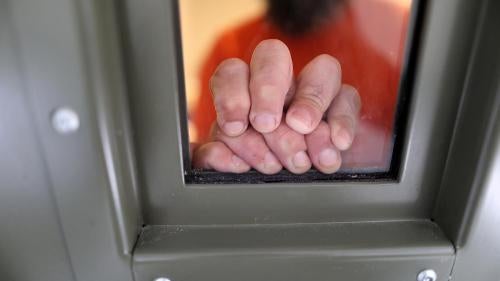 An ICE detainee rests his hands on the window of his cell in the segregation wing at the Adelanto immigration detention center, which is run by the Geo Group Inc, in Adelanto, California, on April 13, 2017.

On the morning of February 28, 2017 Romulo Avelica-Gonzalez pulled up to Academia Avance, a mall charter academy in Highland Park, CA, to drop off two of his daughters at school. After dropping off one daughter, Romulo was pulled over by Immigration and Customs Enforcement (ICE) agents, who were unaware that 13-year-old Fatima was still in the backseat. Over uncontrollable sobs, Fatima filmed the arrest of her father with her cellphone.

Avelica-Gonzalez had a DUI charge from eight years ago and he was once charged with driving without a license. He also purchased a used car nearly 20 years ago, without knowing it bore a registration sticker that had been stolen from another car, The Intercept reported.[1] He has lived in the United States for 25 years, and is the father of four US citizen children.

He is one of thousands of Californian parents of US citizens who are now much more vulnerable to detention and deportation under President Trump’s vastly expanded “priorities” for deportation. Those priorities potentially make nearly all 11 million undocumented immigrants “priority” targets for deportation—setting the stage for what could well be a nationwide dragnet that would harm millions of people.[2]

The California legislature is currently considering several initiatives that could help to mitigate the harms of immigration detention and protect Californian families. These initiatives would strive to make detention conditions more humane and would ensure that detained immigrants receive assistance from state-appointed attorneys. Some policymakers are seeking to limit such legal assistance based on assumptions about who these immigrant detainees are, particularly those with some kind of criminal history.

The purpose of the analysis set forth in this paper is to provide more detailed information on immigration detention in the state, with the goal of helping prompt better, more rights-respecting reforms. A key finding is our estimate that more than 10,000 parents of US citizens are detained in California each year. Another is that nearly half of the detainees had no criminal histories and that, among those with criminal records, those convicted of relatively minor non-violent offenses (such as immigration offenses, drug use or possession, or DUI) outnumbered those convicted of violent felonies by nearly three to one.

The analysis here draws from data on immigration detainees held in California for the four-and-a-half year period from January 1, 2011 to June 30, 2015 (equivalent data on more recent periods was not available at time of the assessment), with a particularly detailed look at data from October 1, 2014 to June 30, 2015, the only portion of the period for which records generally included information as to whether the detainees had US citizen children. Our analysis reveals that California’s sprawling system held 15 percent of the immigrants detained nationwide during the period, and, as noted above, it suggests that tens of thousands of those detained in recent years were parents of US citizen children and that most detainees with criminal histories were convicted of relatively minor offenses. Given the Trump administration’s stated intention to ramp up enforcement efforts, this data provides a grim baseline, demonstrating the imperative of efforts to ensure fair deportation procedures and humane and dignified conditions for people held in immigration detention in California.[3]

“We’re not supposed to be separated from our parents,” Brenda Avelica, Romulo Avelica-Gonzalez’s 24-year old daughter told The Intercept. “Now it’s, like, where you at. I still need you.”[4]

Who is being detained?

Between January 1, 2011 and June 30, 2015, 292,221 adults entered ICE detention facilities in California, an average of about 65,000 a year. This represents about 15 percent of the population of people detained by ICE nationally during that time period.[5] In November of last year, DHS officials said they were holding more than 41,000 people at that time in immigration detention facilities nationally, a record number.[6] The current national or statewide population is not publicly available.

Immigrants detained in California are people who for the most part are arrested inside the state or apprehended at the border.[7] No matter where someone is arrested they may have long-term ties to the state or face persecution in their country of origin, which under international standards should be carefully considered before deportation.[8]

The majority (55 percent) of ICE detentions in California during the time our dataset covers ended in deportation.[9] Another 7 percent leave through a “voluntary return or departure.”[10] A recent study found that 68 percent of detained immigrants in California are unrepresented by counsel and that detained immigrants who had counsel prevailed in their cases more than five times as often as did their unrepresented counterparts.[11]

The time that detainees spend in detention varies greatly. While 84 percent of people in our dataset spent less than one month in detention, 8,298 spent more than 6 months and 1,787 spent more than a year. Most—64 percent—of the people who are held for under a month are released or removed within one day. Only one out of ten detainees in our dataset bonded out of detention. Though our data does not show who is or is not represented by counsel, a recent study of immigration bond hearings in California found that the odds of being granted bond are more than 3.5 times higher for detainees represented by attorneys than those who appeared pro se, net of other relevant factors.[12]

Polls show that a supermajority of Americans—90 percent according to a recent CNN survey—support legalizing and providing a path to citizenship for unauthorized migrants in the US.[15] President Trump’s deportation rhetoric sidesteps this constituency by promising to deport immigrants “that are criminal and have criminal records, gang members, drug dealers”—to which few are opposed.[16] However, data show that only a small minority of the “criminals” the US has detained and deported were convicted of serious crimes: most deportees with criminal histories had been charged or convicted of relatively minor crimes such as offenses involving immigration, drug use or possession, or DUI. Instead of focusing on violent criminals, US immigration policy has ripped apart American families and communities through the deportation of large numbers of lawful residents and undocumented immigrants with less serious criminal histories. The profiles of people deported from California reflect these national trends.

Immigrants, especially those with criminal convictions, often have US citizen and permanent resident family members. These family members can be devastated by detention and separation from their loved ones.[17] The people with criminal histories in California’s immigration detention centers are often people with non-violent criminal histories or with unclear histories that can be better understood only with the help of an attorney. Furthermore, many of these people are Californians with long histories of presence in the state, with strong ties to California families and communities, and with US citizen family members. As an immigrant’s ties to the state grow, so does their tendency to look like other Californians, including the many US citizen residents of California who have criminal records.

In our data, criminal history information was included for people detained between October 1, 2014 and June 30, 2015. Nearly half—47 percent—of the people detained during this period had no criminal history. Based on the broad categorizations provided by ICE, we estimate that 9 percent of detainees could be identified as convicted of a violent felony as defined in California law.[18] Most of the rest—27 percent—had criminal histories that were relatively minor, with offenses involving immigration, drug use or possession, or DUI as their most serious crime. (The remaining 17 percent had criminal histories that were unclear.) Those convicted of relatively minor offenses thus outnumbered those convicted of felonies by nearly three to one.

While this data suggests that people in immigration detention who have spent the longest time in the US are more likely to have criminal convictions, it is important to note that a long series of studies have found that immigrants in the United States are less prone to commit crime than people born here.[19] People with criminal convictions in immigration detention have served their sentences and paid their debt to society. They are also likely to be people who came to the country as children, or who have lived in the state for many years. They are likely to be people with the strongest ties to California’s communities and families, and the most likely to have serious concerns about the harm that they and their loved ones are likely to suffer from immigration detention and deportation.