US: In New York, Children as Young as 14 Can Marry

(New York) – New York State’s legislators and governor should back a proposed law to help end child marriage in New York, Human Rights Watch said today in a letter to New York lawmakers. In the period from 2001 to 2010, 3,850 children under the age of 18 married in New York State.

Child marriage is any marriage of a person under the age of 18. Under current law, the minimum age of marriage in New York is 18, but the law permits exceptions to that minimum age, allowing children age 16 and 17 to marry with parental approval, and 14- and 15-year-olds to marry if they have permission from a judge in addition to their parents. The vast majority of US states permit marriage before the age of 18 under some circumstances.

“It is frankly shocking that New York permits the marriage of 14-year-olds,” said Heather Barr, senior researcher on women’s rights at Human Rights Watch. “Such a law is out of step with the rest of the world. Even in countries with high rates of child marriage, there is usually recognition that marriage under age 18 is harmful, and an effort to prevent these marriages, beginning with reforming the law.”

A bill, A.5524, introduced in the New York State Assembly on February 10, 2017, would reduce child marriage by prohibiting marriage before the age of 17 in New York. Human Rights Watch is working with the organizations National Organization for Women, Sanctuary for Families, Tahirih Justice Center, and Unchained at Last to urge New York lawmakers to pass this bill. A law curtailing child marriage in Virginia came into effect in June 2016, and similar legislation has been introduced in New Jersey, where it passed the state assembly, and in Maryland.

Human Rights Watch has done extensive research on child marriage around the world, interviewing hundreds of married children in countries including Afghanistan, Bangladesh, Malawi, Nepal, South Sudan, Tanzania, Yemen, and Zimbabwe. Human Rights Watch has also advocated for an end to child marriage in other countries, including Indonesia, Iran, Iraq, Malaysia, Nigeria, Pakistan, and Saudi Arabia. Of these countries, only Iran, Saudi Arabia, and Yemen have laws that would permit the marriage of a 14-year-old.

Globally, one out of every four girls marries before age 18, and 15 million girls marry before the age of 18 each year. There are 720 million women and 156 million men alive today who married before the age of 18. The rate of child marriage is dropping, but population increases mean that if child marriage were to continue at today’s rate, by 2050, there would be 1.2 billion women alive who married as children. Child marriage occurs in every region of the world. The overwhelming majority of married children are girls, most of whom marry spouses who are older than them – sometimes much older. 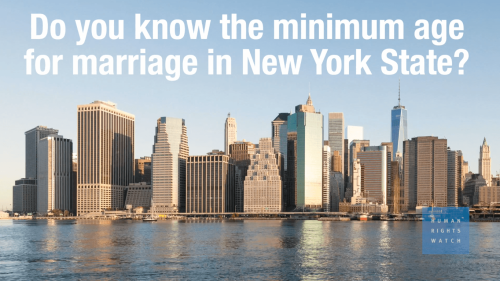 A growing body of research demonstrates that child marriage is associated with, and in some cases causes, severe harm to married children, wherever they live. A 2010 study found that girls or young women in the US who married before the age of 19 were 50 percent more likely to drop out of high school than their unmarried counterparts, and four times less likely to complete college. Girls who marry as early teens (before 16) in the US are around 31 percent more likely to end up in poverty later in life. Researchers have found significant associations between child marriage and mental and physical health disorders. One study found that marrying as a teenager in the US was associated with a 23 percent higher risk of disease onset for women. Research from other countries shows a correlation between child marriage and domestic violence. Married girls often find it more difficult than married women to escape an abusive or unhappy marriage and to access services such as shelter and legal assistance.

“The research is clear – child marriage is terribly damaging to married children and their families,” said Heather Barr. “The US, through its foreign aid programs, has been a leader in urging an end child marriage in other regions, including Africa and Asia. Yet shockingly, US states are still allowing child marriage to persist.”

New York’s requirement for parental consent provides no protection in situations where parents are pressuring or forcing a girl to marry. Under New York’s current law, judicial review is only required in cases where the child marrying is under the age of 16 – an age at which marriage should not be permitted under any circumstance.

Child marriage is a complex issue to address, and its eradication requires strong leadership from government and partnerships with religious leaders, nongovernmental organizations, and communities to bring about social change. But first and foremost, it requires government and people in positions of leadership and influence to recognize and accept that child marriage is a problem, one that can be addressed through concerted action.

“Children need to be protected from marrying for the same reason there are other age restrictions – drinking alcohol, joining the military, possessing a handgun,” said Barr. “There is a growing consensus, globally, that 18 years old should be the minimum age of marriage.”