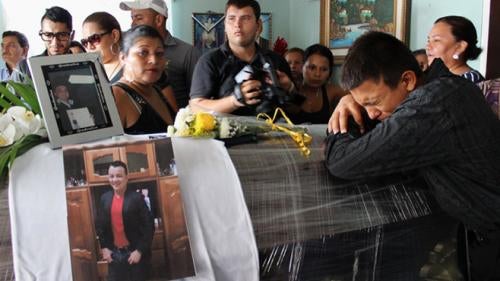 Honduras suffers from rampant crime and impunity for human rights abuses. The murder rate was again the highest in the world in 2014. The institutions responsible for providing public security continue to prove largely ineffective and remain marred by corruption and abuse, while efforts to reform them have made little progress.

Journalists and peasant activists are particularly vulnerable to violence, yet the government routinely fails to prosecute those responsible and provide protection for those at risk.

The unlawful use of force by police is a chronic problem. According to a report by the Observatory on Violence at the National Autonomous University of Honduras, police killed 149 people between 2011 and 2012. Then-Commissioner of the Preventative Police Alex Villanueva affirmed the report’s findings and said there were likely many more killings by police that were never reported. The government did not respond to calls by the National Autonomous University rector asking it to provide information on how many of those killings had been subject to investigations or resulted in criminal convictions.

Efforts to address endemic corruption within the police force have made little progress. While tests designed to identify corruption have been administered to more than 4,500 police officers, only a fraction of those who have failed the test have been removed from their posts. According to the Public Security Reform Commission, the institution formerly responsible for designing reforms to justice and public security organs, just 3 percent of the 230 officers recommended for dismissal in 2012 were ultimately removed from their posts.

In November 2011, Congress passed an emergency decree allowing military personnel to carry out public security duties, which has been extended periodically. In August 2013, a law was passed authorizing the creation of a military police force with powers to impose control over violent neighborhoods and carry out arrests, among other duties, despite a history of abuses by the military against civilians. The military police force was deployed in January 2014.

In August, soldiers detained Marco Medrano Lemus close to his home in La Lima, Cortés. According to local press accounts, he was found dead shortly thereafter and an autopsy showed signs he had been tortured. Eight soldiers were arrested in relation to the incident, and investigations were continuing at time of writing.

Following a military coup in June 2009, the de facto government suspended key civil liberties, including freedom of the press and assembly. In the ensuing days, security forces responded to generally peaceful demonstrations with excessive force and shut down opposition media outlets, causing several deaths, scores of injuries, and thousands of arbitrary detentions. A truth commission established by former President Porfirio Lobo published a report in July 2011 that documented 20 cases of excessive use of force and killings by security forces.

In August 2014, José Arnulfo Jiménez, a former military officer, was sentenced to five years in jail for the arbitrary closure of Channel 36 in June 2009. Jiménez had led a contingent that occupied the premises of the media outlet, preventing broadcasting for several days. At time of writing, there has been little progress in prosecuting other abuses committed during the post-coup period.

Judges face acts of intimidation and political interference. In December 2012, Congress voted to remove four of the five justices in the Supreme Court’s Constitutional Chamber after they ruled that a law aimed at addressing police corruption was unconstitutional. Replacements were appointed in January 2013, and the new court rejected a legal challenge by the dismissed justices the following month. Since their removal, the former justices have reported being subject to repeated acts of intimidation, including death threats and police harassment.

A 2011 constitutional reform established a Council of the Judiciary with the authority to appoint and dismiss judges. According to the International Commission of Jurists, the selection process for the council’s members lacked safeguards to protect against political interference and was marred by irregularities, including the exclusion of representatives from one of Honduras’s two judicial associations. More than 40 judges have been suspended since the council began its work.

Journalists in Honduras continue to suffer threats, attacks, and killings. Authorities consistently fail to investigate and prosecute these crimes. More than 30 journalists have been murdered since 2009, according to the National Human Rights Commission (CONADEH), though the motive in many of the cases has not been determined.

In December 2013, Juan Carlos Argeñal Medina, a reporter for Globo TV, was shot dead in the city of Danlí, El Progreso, after receiving death threats in connection with his work on corruption in a local hospital. In the past, Globo TV was subject to a series of violent attacks following its critical reporting on the 2009 coup.

More than 90 people have been killed in recent years in land disputes in the Bajo Aguán Valley, most of them since 2009, according to a March 2013 report by CONADEH. Scores more have been victims of attacks and threats. The disputes often pit international agro-industrial firms against peasant organizations over the rightful ownership of lands transferred following a reform to the country’s agrarian law. While most victims have been peasants, private security guards have also been killed and wounded.

Honduran authorities have failed to effectively investigate abuses or provide protection for those at risk. A Human Rights Watch investigation into 29 cases of homicides and 2 abductions in Bajo Aguán found that none of the cases had been successfully prosecuted.

Inhumane conditions, including overcrowding, inadequate nutrition, and poor sanitation, are systemic in Honduran prisons. The country’s jails, which can hold a maximum of approximately 8,600 inmates, were holding more than 13,000 in August 2013, according to the Inter-American Commission on Human Rights. Corruption among prison officials is widespread.

Human rights defenders continue to be subject to violence, threats, and killings. In May, José Guadalupe Ruelas, director of international children’s charity, Casa Alianza, which has criticized authorities for failing to protect children from organized crime, was arbitrarily detained and violently beaten by military police. He was released the next day after local human rights organizations intervened on his behalf.

The Lobo administration submitted draft legislation to Congress in August 2013 to protect human rights defenders, journalists, and legal practitioners, but the law had not been passed at time of writing.

Children experience high levels of violence, largely perpetrated by gangs and other forms of organized crime. In May, five adolescents believed to be associated with the Mara Salvatrucha gang were killed in the El Carmen Pedagogical Center for Rehabilitation, reportedly by members of rival gangs. According to CONADEH, 458 children were murdered between 2010 and 2013. Casa Alianza reports that in the first 4 months of 2014, 270 people under the age of 23 were killed.

It is likely that gang violence has contributed to a surge in youth migration to the United States in recent years. A 2014 report by the United Nations High Commissioner for Refugees found that 34 percent of child migrants from Honduras identified this violence as a motive for leaving their home country.

The United States allocated more than US$50 million in security aid to Honduras from 2010 to 2014  and continues to provide assistance through the Central American Regional Security Initiative (CARSI). US legislation granting military and police aid to Honduras stipulates that 35 percent of the funds will be available only if the Honduran government meets several important human rights requirements.  As of February 2013, the US Congress was reportedly withholding approximately $30 million of aid over human rights concerns.

In February 2013, the United Nations Working Group on the use of mercenaries stated that the government had failed to properly regulate private security firms and expressed concern regarding their “alleged involvement … in widespread human rights violations including killings, disappearances, forced evictions, and sexual violence.”

In January 2014, the ombudsman for the International Finance Corporation (IFC), the private-sector lending arm of the World Bank, found that the IFC had failed to conduct adequate due diligence and to assess and respond to known risks of violence and forced evictions associated with its investment in Dinant, a palm oil and food company that was at the center of a spate of violence and killings in Honduras.

In August, the ombudsman similarly found that the IFC had fallen short in identifying and addressing risks in its investment in Banco Ficohsa, the largest bank in Honduras. Dinant was one of Banco Ficohsa’s largest borrowers.